“Your corn is ripe today; mine will be so tomorrow. ‘Tis profitable for us both, that I should labour with you today, and that you should aid me tomorrow.”

A whole host of Scottish and US brands, and individuals, have collaborated and contributed to the production of events and the performance launch of the Iona Crawford ‘Beauty and the Beasts’ Capsule Collection.  They have given time, connections, products, expertise, goodwill and much more.

To them all, we extend our wholehearted thanks and appreciation.

At Slow Luxury, we support and participate in charitable activities for a whole range of causes.  For this collaboration, 10% of the sale price of the Iona Crawford ‘Brodie’ pillow, available from our shop, will be donated to the International Fund for Animal Welfare .

Find out more below… 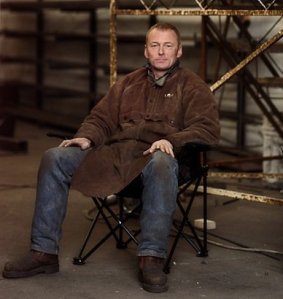 Andy Scott
Andy Scott is a Scottish sculptor, a graduate of Glasgow School of Art in 1986, with over 70 projects across a wide range of disciplines throughout the UK and internationally. His distinctive hand-crafted figurative sculptures combine traditional dexterity with contemporary fabrication techniques and inhabit the public realm creating engaging narrative and instant recognition.

Iona Crawford’s ‘Beauty and The Beasts’ Capsule Collection was inspired by  Andy Scott’s magnificent Kelpies, 100-ft  horse sculptures arising from the land at The Helix at the Forth & Clyde canal at Falkirk, Scotland. The Kelpie maquettes were on view in Bryant Park , New York during April 2014.
Find out more about the Kelpies here.

Hannah Read
Hannah Read, currently residing in New York City, is a fiddler, singer, songwriter and composer from Edinburgh, Scotland. She spent her early years living between Edinburgh and the Isle of Eigg, a small island off the west coast of Scotland. It was on Eigg where she was first inspired to play music. At eleven, Hannah was accepted into the prestigious City of Edinburgh Music School where she spent six years studying Scottish fiddle, classical violin, piano, and vocals. While still in school, Hannah performed at the opening of the Scottish parliament, the Millennium Dome in London, Celtic Connections Festival, Glasgow Jazz Festival, as well as with Celine Dion and for the Dalai Lama.

In 2005 Hannah was accepted into the American School of Modern Music in Paris, where she studied jazz vocals and piano under jazz bassist/educator Peter Giron. The following year, Hannah received a violin scholarship to Berklee College of Music in Boston, USA and studied in the string department under Matt Glaser, Darol Anger, John McGann, Mark Simos and Natatlie Haas. Hannah immersed herself in the thriving new acoustic scene in Boston and joined the alternative string band the Folk Arts Quartet. The Folk Arts Quartet toured throughout the USA and Canada and released their self-titled album in 2009. They also performed for Smokey Robinson, Paul Simon, Linda Ronstadt, Mavis Staples, Christopher Guest, and played with Eugene Freisen and Raffi.

In Spring 2010, Hannah joined the Nu-Nordic, Edinburgh based band FRIBO. She appeared on the latest record ‘Happ’ which was nominated for ‘Best Album’ at the Scottish New Music Awards and ‘Best Folk Band’ at the Scottish Trad Music Awards in 2011. With Fribo, Hannah toured in Western Canada, appearing at Vancouver and Calgary Folk Festivals, as well as in Europe, performing at Cambridge Folk Festival, Korro Folk Festival in Sweden and Nordsjøfestivalen in Norway.

Upon graduating from Berklee with a Bachelor of Music in 2011, Hannah moved down the road to New York City pursue work as a full-time musician. The following Spring Hannah released her debut album of original material ‘Wrapped in Lace’, followed by ‘Covers’ in April 2013, both produced by Charlie Van Kirk. Hannah performs regularly with her own band as well as her all-lady trio T.H.E.M, alongside Megan Lui and Tamsin Wilson. She is an in-demand musician throughout the Brooklyn music scene for both her singing and fiddle playing – Ted Dwane of Mumford & Sons describes Hannah as being ‘a fiddle gangster, the Al Capone of the violin world!’. During the last two years she has been fortunate to headline festivals and tour with many bands in the USA and Internationally. Hannah has opened for The Avett Brothers, Annie & the Beekeepers, Young the Giant and the Deadly Gentlemen. She has also performed at SXSW, Lorient Festival in France, Grass Valley Celtic Festival in California, Make Music NYC Festival, Edinburgh Fringe Festival and NYC Tartan Week 2013.

Small Earth Group
Small Earth Group specialises in brand development and provides complete in-house strategic solutions to market your service, product or event to the Latin American and foreign demographic in the U.S.

re:artiste
ReArtiste provides representation for both emerging contemporary artists and internationally acclaimed artists with the goal to build their awareness and promote their artworks. ReArtiste evolved from BPO Group USA, a company focusing on creative marketing, branding, business consulting.

The ReArtiste founders, Natalie Burlutskaya and Maria Kordova, are art business and event planning professionals whose passion for art led to supporting artists in the business aspects of their activities.

Iain’s passion began in northern Japan after discovering another Mâitre Chocolatier who had created a unique truffle. It took 3 years and over 120 fine adjustments for Iain to be satisfied with his own exquisite truffle recipe which uses only natural and fresh ingredients – the now famous Velvet Truffle.  In the process he honed the skills needed to become a genuine artisan chocolatier, developing techniques that require a great deal of time, skill and experience.

In 2006, his specially designed chocolate kitchen opened in Highland Perthshire, Scotland. Iain and his team began to provide top chefs with gourmet truffles of an artisan quality unavailable elsewhere. The small dedicated team of chocolatiers are trained in-house to meticulously hand-craft chocolates.

Recipe development in his kitchen is on a different level to others, combining the natural creativity of the team with a constant micro-level search for excellence – tiny alterations to temperatures to accentuate the crystallisation texture and utilisation of ballistics engineering expertise to reduce the thickness of the chocolate shell by a few microns for a more delicate experience.  Unlike moulded chocolates, his ganaches can be elegantly enrobed in chocolate, or experienced in its purest form without a chocolate shell at all!

Iain uses a uniquely flavoured single-origin cocoa from the volcanic island of São Tomé in the South Atlantic.  This intense cocoa was carefully selected for its exceptional range of fruity, aromatic and spicy characteristics, and was painstakingly matched with an unblended fresh Scottish cream from a particular herd of cows.

With no artificial additives or preservatives, only the best ingredients and exotic spices are infused to create flavours and textures to delight the palate.  Each fresh harvest brings constantly shifting flavour balances to his recipes.

aroma M
aroma M, founded by Maria McElroy, is an independent purveyor of uniquely beguiling fragrances that interpret and update the Geisha sensibility and the subtleties of Japanese incense for contemporary fragrance connoisseurs.

Among the handful of artisanal perfumers who today are collectively updating the fragrance industry, they are proud to be known as direction-setters. For example, they initiated the contemporary location-oriented approach to perfumery—a concept they have romanced throughout twelve years in business.

While steeped in the ways of ancient Eastern fragrancing traditions, and while adhering to the Eastern mandate that beauty is a daily responsibility, aroma M are ultra-modern in their choice of unexpected ingredients and novel combinations of ingredients, such as lychee with rose, and white chestnut blossom with muguet.

aroma M perfumes and perfume oils are designed not only to smell beautiful, but simultaneously to enchant the mind and the soul—to help relieve daily stress and promote composure and wellbeing.

aroma M is gender-neutral. Men as well as women are attracted to unexpectedly tantalizing perfumes that do not follow traditional male-female scent divisions. 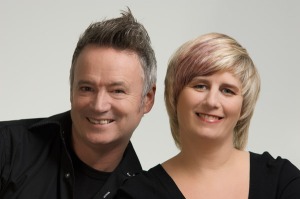 Smith & Grieve
Brian Grieve has achieved an international reputation within the hair industry for his platform and educational presentations.

Brian has conducted, presented and participated in more than 400 shows in the USA and Europe.

Writing, developing and delivering education courses and seminars, covering a broad spectrum from foundational to advanced, incorporating an artistic flair and an unique platform for learning. Brian continues to share his personal brand of hair education with the belief that great growth begins at a grassroots level.

The core of Brian’s education is based on ‘method and technique’ understanding these components enables stylist’s to interpret any trend. Giving is the key, to enable fellow professionals to feel more empowered and confident, to achieve greater goals.

“The time is always right to consider a fresh approach to one’s craft”.

Donations of fabric and ribbons from the performance will be made to Materials for the Arts, ‘New York’s premier reuse centre, providing a way for companies and individuals to donated un-needed supplies to thousands of non-profit organisations with arts programming and public schools.’

Meet your very own GPS for life.

Your Passport To The QUEEN, A Slow Luxury co*lab Project Begins Filming

YOU: And That Mythical, Mystical, Heavenly Heroine-Like Scent of A Woman

This Here is a Once Upon a Time Story, so […]
YOU: And That Mythical, Mystical, Heavenly Heroine-Like Scent of A Woman